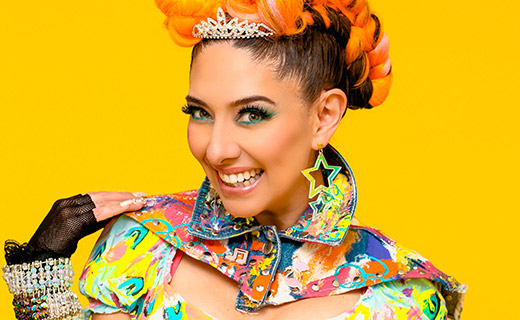 We're excited to welcome you back to Santa Monica Places Kids Club! We have missed all of our friends so much and are thrilled to sing, dance, and laugh with everyone again.

Come play with us on the first Wednesday of every month for a FREE, fun, family-friendly musical morning hosted by Twinkle Time, a bilingual, Billboard pop-artist for kids, and featuring special guests each month.

Twinkle Time was born and raised in SoCal Bilingual Billboard Charting Kindie Rocker Twinkle Time formed the hit girl band, Disney/Hollywood Records Nobody’s Angel, opened for Britney Spears and The Backstreet Boys, sang on movie soundtracks like The Parent Trap, Pokemon, The Wedding Planner, and 102 Dalmatians, earned a Gold Record for two of their songs on The Princess Diaries soundtrack which hit #5 on Billboard Charts. Their hit song "If You Wanna Dance" charted #39 on Billboard Charts and their Album listed as one of the Top 200 Albums of  2000 on Billboard Charts.

Peruvian- American Twinkle Time is now an indie touring artist for KIDS of All AGES  tours over 300 days out of the year (Pre Pandemic) YAY for 22 "The Return of LIVE Shows." Has appeared on CNN Español, Telemundo, Univision, Fox LA  just to name a few. Twinkle's song UNIDOS just won Best Latin Song of the year USA Songwriting competition, Top 5 nominee for Best Children Song of the Year with her song Mask It Up  and has just been named  Artist of the Year  in the world wide  award show for families Funky Kids Radio.

The first Wednesday of every month, starting May 4, ending December 7.

All ages welcome. This event is FREE to attend for parents and children.

Snacks will be provided by GoGo squeeZ (while supplies last)

We use cookies to give you the best possible experience on our website. Read our Cookie Policy to learn more. I ACCEPT
NEW & NOW
SHOPPING
DINING
VISIT
SERVICES
Lease a QuikSpace
Plan a Visit
See Mall Hours